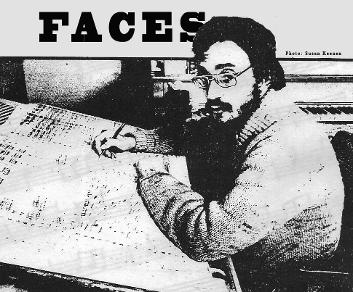 In music industry lingo, the term "crossover" suggests that one song or artist may "hit gold" in more than one column of the charts. Dolly Parton, for example, has both pop and country appeal. But the seemingly conflicting musical genres of Stuart Diamond pushes the term to its limits: neo-classical, crossed-over with what the alternatively self-promoting/effacing composer describes as "progressive disco," a sound one might get by mixing tracks of Paul (Last Dance) Jabara and Pete (1812 Overture) Tchaikovsky. The end result is something quite different from either of its sources, or, for that matter, from anything that has heretofore shaken the foundations of Studio 54, A Fifth of Beethoven notwithstanding.

Being different is nothing new to Diamond. "If I had been following everyone else, I never would have been noticed," states the slim, curly-haired West Sider while scooping himself a cup of coffee from a crusty saucepan on the stove of his eight room "tenement."

While disco is a relatively recent venture for him, Diamond's "difference" is better known for his classical work, which has been heard around the country, in Europe and Israel, on radio, danced to by Elizabeth Geyer Gottlieb, and performed here in the City at Carnegie Recital and Alice Tully Halls. It will be heard again next month' at the Guggenheim Museum in the third Criterion Concert, a series directed by Diamond and flutist Andrew Bolotowsky. Reviewing his work, The New York Times found Diamond to be "a refreshingly original composer in that he subscribes to no fashionable school and apparently writes according to his own fancy."

But as Diamond explains it, his stylistic difference arose not so much from a rejection of the contemporary classical music scene as from a complete ignorance of it.

“I grew up in Long island, like everybody else, and was put on bassoon in junior high. I was immediately sought after and exposed to high-fallutin, fancy-schmancy music, whether I could play it or not.”  He soon succumbed to the

romance of Tchaikovsky and began writing symphonies at age 15, although "I didn't know the difference between major and minor."

“I grew up in blissful ignorance of the contemporary music scene, and I continued to write my Tchaikovsky-type melodies and symphonies at college" (Haverford). Enlightenment came—and went—while attending Sarah Lawrence College for his MFA. "They left me merrily alone in an electronic music studio." When I fell out on the world I was still blissfully ignorant, but I wasn't going to change. I had my opinions, my dogma, and I was ready to follow through." As for all this attested ignorance, further probing reveals that he supported himself in part by doing arranging for Columbia Records: "I figured it was a snap—I read a book on recording sessions, dropped the right words, and got the job." By this time, his music was "a little better, but not much," and he had learned the difference between major and minor. "Just," he qualifies.

After graduation, an early venture into commercialism brought him to Lehman Engle's BMI sponsored song-writing course. Such lyrical efforts as "Is This Love? I don't know. If it is I feel O.K.," left Engels unimpressed.

What followed was a two-year realization of his Tchaikovsky fantasy. 'I lived, starved, died of consumption in an East Village garret, working constantly. There was nothing else to do... I wrote five to six hours a day, tons of works, all symphonies. The work was harmonically simple and direct, but well-orchestrated. And it paid off in experience." While steadfastly ignoring anything that smacked of atonality his compositions increasingly utilized electronic sounds merged with a Ravel-like quality.

And, like Tchaikovsky, who found a patrons in Mme. Nadezdha von Meck, Diamond found a contemporary equivalent in the form of the foundation grant. Liberally paraphrasing his benefactors, Diamond quotes them as saying, "This is exactly what we've been looking for,  someone who's been writing differently and ignored everything else. Here's money." For Diamond, this was the final and necessary pat on the head. "It convinced me to be even more iconoclastic."