"Tyme's Escape" is improvisation with mad genius organist Paul Fejko.  The premise: Paul and I had never played together before. So the plan was to meet in this cathedral in Worcester, Massachussets  that features a famous organ with over 7000 pipes. Turn on the tape recorder and play for an hour. 2AM in the morning (to avoid daytime car traffic noise), freezing cold night, playing in our winter coats.  No recording or description can capture the reality of what happened. The Lyricon soars over 7500 organ pipes coming from 360 degrees. And when the massive 32 foot Contra Bombarde pipes come in sync with the Lyricon bass notes - the stone floors and walls of the cathedral vibrating in resonance – they create a colossal sound surpassing even the power of largest symphony orchestras or rock band.  Outside of this recording (a pale reflection of the sonic truth) the only ones to testify to do it all were myself, Paul, the producer, the audio engineer and an assistant."

A remarkable exercise in so-called 'New Age' styles, contemporary technology and ancient performance skills wedded into a brilliantly realized color tapestry. This is improvisation of the highest order.... Fejko and Diamond are master musicians who display their mastery in ways common to many cultures outside the circumference of most traditional western musics.

Once in a while something really new happens in this business - this is one! The first live, 60 minute, non-stop CD recording of an awesome 125 rank (7000 plus pipes)  organ and a Lyricon wind synthesizer performed at 2AM at All Saints' Episcopal Church in Worchester, Mass. No editing or post-mixing! The Genius of Feijko and Diamond are displayed in this unusual landmark recording. While this album is of NEW AGE basic style its nature is of incredible dynamics and tonal variations that should please lovers of all kinds of music. 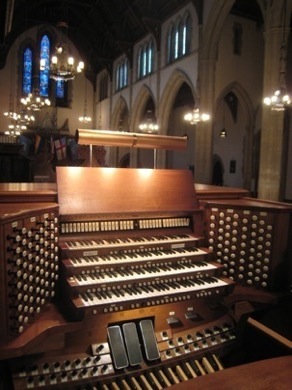 All Saints Church, founded in 1838, lost its first building, designed by Richard Upjohn, to fire in 1874. Parishioner Stephen Carpenter Earle designed the second church which was also destroyed by fire in 1932. The current building, designed by Frohman, Robb and Little of Boston, was opened in 1934. The first identified organ at All Saints was Opus 163 of William A. Johnson, installed in 1864; two earlier organs were by builders currently unknown. The 1876 Hutchings, Plaisted & Co. organ, Opus 67, was replaced in 1923 by E.M. Skinner's Opus 406. The present Aeolian-Skinner Opus 909 incorporates the same builder's Opus 895, which was used temporarily while the new building was being erected. Changes designed by William Self, organist 1934-1954, in cooperation with G. Donald Harrison, were made during 1940-43 and 1951. The Positiv and Antiphonal divisions were added in 1963 under the dirction of Joseph Whiteford , and a new console was installed in 1967. All organs and additions since 1923 have been given and maintained by the William Ellis and Lucy Draper Rice family. 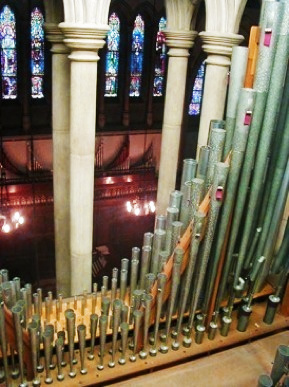 Pipes of the celebrated Bombarde division, from high within the main chamber.
On the far wall, above the console, is the 1964 Positiv division.

The History of the All Saints Church Organs

The first building of All Saints Church located on Pearl Street, Worcester, was finished in 1846 and furnished with an organ.  As it was still only partially paid for by 1853, the organ “was claimed by the owner, and removed.”  Later that same year it was replaced at a cost of $6oo.oo. Research has failed to reveal who built the first two organs.  The third, a two-manual tracker, was the product of William A. Johnson, Opus163, installed when the building was enlarged in 1864. Unfortunately the Johnson organ was destroyed by fire on Easter Tuesday 1874.

Aeolian-Skinner supplied a three-manual organ (Opus 895, 1932) for temporary use in Huntington Hall until a new building could be finished.  Aeolian-Skinner’s Opus 897, 1932, a 2-rank practice organ, was installed in the Choir Room.

Opus 909, 1933, was installed in the new church building which opened for worship on Easter Sunday 1934. Changes and additions to the organ, designed by William Self in cooperation with G. Donald Harrison, were made in the years 194o to 1943, delayed in completion because of World War II. Albert W. Rice, son of William and Lucy Rice, made the improvements possible. Additional alterations were made by Mr. Harrison in subsequent years and at one time more than 1,500 pipes were removed to the Aeolian-Skinner factory in Boston for revoicing or replacement. In 1951, the original enclosed Bombarde division was completely revised and the shutters removed.

The Antiphonal Organ and Positiv were added in anitphonal1963, built under the direction of JosephWhiteford of Aeolian-Skinner. Gilbert F. Adams did the tonal finishing.  In 1967, Mrs. Mary Gage Rice gave a new console in memory of her husband Albert, who died in 1965. In 1975, Mrs. Rice gave a new pair of horizontal Trumpets, provided by the Berkshire Organ Co. Berkshire also made some other tonal modifications in 1976 at the suggestion of William Self. David W. Cogswell of Berkshire designed a new Great Fourniture with voicing by Judd Fitzgerald, a former voicer for Aeolian-Skinner.

By the late 1990s, the pneumatic switching system controlling the organ was showing signs of constant use, and needed either complete restoration or replacement.  Through the generosity of the Leonard H. White Family, the church engaged Southfield Organ Builders of Springfield, who re-outfitted the console with new solid state equipment. Keyboards and cabinetry were restored and the entire organ was rewired in compliance with the National Electrical Code.  At the same time, several ranks of pipes that had been removed over the years were recreated (following Aeolian-Skinner shop notes) to enrich the tonal palette of the instrument.  In the 1930s, orchestral colors (English Horn, French Horn, Solo Flute, Solo Strings) were considered indispensable in a large organ.  The All Saints organ was a site for experimentation and development by Aeolian-Skinner of alternate sounds such as the French Bombarde reeds and large mixtures.

In the Rice Memorial Organ one can trace the entire twentieth century pendulum swing of organ building tastes.  The orchestral sounds once present have been re-created while the “classic” additions of French reeds and mixtures have been preserved as well.  The result is an organ of unusual variety, great power, clarity and brilliance.  The re-dedication of the Rice Memorial Organ of four manuals and pedal, seven divisions, 135 ranks and over 7,000 pipes took place during theLenten Recital Series 2000.The two manual Choir Room organ, Aeolian-Skinner, Opus 897, 1932, had fallen prey to vandalism and water damage rendering it unusable for the last quarter century. In 1996, Timothy E. Smith refurbished the instrument to playable condition.

History compiled by Joyce Hokans. Compiled from writings of Alan Laufman for the Organ Historical Society, 1983, and The NorthEast Organist, 1996; and Timothy E. Smith, Organ Consultant, 1999

This Æeolian-Skinner organ is one of four or five historically significant American organs created by the company’s tonal director G. Donald Harrison in the 193os, marking a major turning point in American organ building. This renaissance was characterized by turning away from the prevalent orchestral organ which, to be sure, was ideally suited to transcriptions, to an organ whose well-developed, carefully balanced principal and reed choruses and independent pedal division reflected a tonal concept firmly rooted in the best of the past but which made no pretense at replicating the past. A few of the more beguiling orchestral voices were happily retained, but never at the expense of the integrity of basic ensembles. This Harrison ideal soon became known as “American Classic” and was subsequently adopted by most other American builders. Along with All Saints’, Harrison’s instruments at Trinity Church, New Haven, The Church of the Advent, Boston, St. Mark’s, Philadelphia and St. John’s Chapel, Groton School, Groton, Massachusetts are hallmark instruments of depression-era organbuilding when contracts were scarce, and when for the fortunate few clients, it was possible to lavish immense labor resources on the development and perfection of Harrison’s evolving tonal ideals. A remarkable organ in many respects, the All Saints instrument is perhaps still most notable for the exclusive use of French-style chorus reeds throughout, even in the Great division – atypical for Harrison. With its proximity to the firm’s factory in Boston, All Saints became a prime site for experimentation and also a showcase for future clients.

Opus 9o9, 1933, was given by Lucy Rice in memory of her husband William and installed in the new church building which opened for worship on Easter Sunday 1934. After acoustical treatment to the ceiling in 1936 (deadening the room as was the custom in America at the time), changes and additions to the organ, designed by All Saints organist William Self in cooperation with G. Donald Harrison, were made in the years 194o to 1943, delayed in completion because of World War II. Albert W. Rice, son of William and Lucy Rice, funded the improvements.

Additional alterations were made by Mr. Harrison in subsequent years and at one time more than 1,500 pipes were removed to the Aeolian-Skinner factory for revoicing or replacement. In 1951, the original enclosed Bombarde division was completely revised and had its shutters removed. The Antiphonal Organ and Positiv were added in 1963 and 1964, respectively, built under the direction of Joseph Whiteford of Æolian-Skinner, with tonal finishing by Gilbert F. Adams. In 1967, Mrs. Mary Gage Rice gave a new moveable console in memory of her husband Albert, incorporating controls for the added divisions. In 1975, Mrs. Rice gave a new pair of horizontal Trumpets, provided by the Berkshire Organ Company.

By the late 199os, the pneumatic switching system controlling the organ was failing, and needed either complete restoration or replacement. Through the generosity of the Leonard H. White family, the console was re-outfitted with new solid state equipment. Keyboards and cabinetry were restored and the entire organ was rewired.

At the same time, several ranks of pipes that had been removed over the years were recreated (following the original Æolian-Skinner shop notes) to restore six enclosed ranks to the Bombarde division. In the Rice Memorial Organ the orchestral sounds initially present now exist alongside the “classic” transformation of French reeds and mixtures. The result is an organ of unusual variety, great power, clarity and brilliance.

Leading up to its 75th anniversary in 2oo9, long-range planning has been undertaken to ensure the future of this instrument’s distinctive voice. Deteriorating leather conditions which exist in any organ of this age must soon be addressed, as well as pipe restoration to reverse the effects of dirt and age. A 2oo7 grant from the George F. and Sybil H. Fuller Foundation enabled the construction of playable stations within the pipe chamber (enlightening area school groups and potential donors alike), video monitoring equipment used in recitals and presentations, and consulting work documenting the complexity and integrity of the instrument and its setting. To create a restoration workscope in keeping with the instrument’s distinguished history and the parish it serves, a mechanical and tonal survey of Opus 9o9 has been completed by Jack Bethards of Shoenstein & Co., who has worked extensively with landmark Æolian-Skinner organs at Grace Cathedral, San Francisco (Opus 91o) and the Mormon Tabernacle. Acoustical recommendations and structural engineering have also been completed, in consideration of returning the sonic environment to that when the organ was installed. A forthcoming recording by organist Christopher Houlihan was made during a week of survey work when all furniture had been removed from the Nave, approximating the result of removing the sound-deadening material. Another focus during this time has been the rebuilding of the choir program which is dependent upon the organ, and an identifiable, unified and expanded series of musical offerings to the wider community. With these incentives in place, it remains to raise the funds for the work, and to ensure endowment for long-term maintenance. 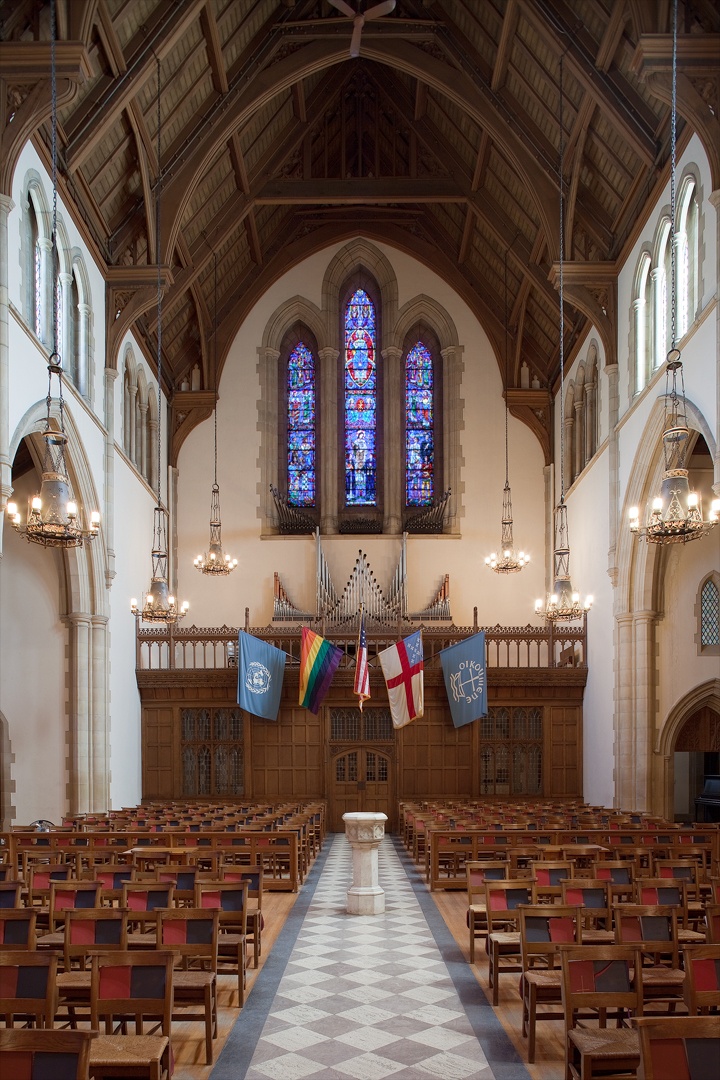 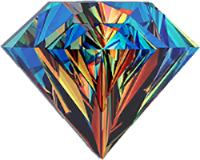